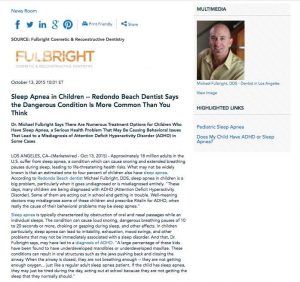 Dr. Michael Fulbright says there are numerous treatment options for children who have sleep apnea, a serious health problem that may be causing behavioral issues that lead to a misdiagnosis of Attention Deficit Hyperactivity Disorder (ADHD) in some cases.

Los Angeles, CA – Approximately 18 million adults in the U.S. suffer from sleep apnea, a condition which can cause snoring and extended breathing pauses during sleep, leading to life-threatening health risks. What may not be widely known is that an estimated one to four percent of children also have sleep apnea. According to Redondo Beach dentist Michael Fulbright, DDS, sleep apnea in children is a big problem, particularly when it goes undiagnosed or is misdiagnosed entirely. “These days, many children are being diagnosed with ADHD (Attention Deficit Hyperactivity Disorder). Some of them are acting out in school and getting in trouble. Well-meaning doctors may misdiagnose some of these children and prescribe Ritalin for ADHD, when really the cause of their behavioral problems may be sleep apnea.”

Sleep apnea is typically characterized by obstruction of oral and nasal passages while an individual sleeps. The condition can cause loud snoring, dangerous breathing pauses of 10 to 20 seconds or more, choking or gasping during sleep, and other effects. In children particularly, sleep apnea can lead to irritability, exhaustion, mood swings, and other problems that may not be immediately associated with a sleep disorder. And that, Dr. Fulbright says, may have lead to a diagnosis of ADHD. “A large percentage of these kids have been found to have underdeveloped mandibles or underdeveloped maxillae. These conditions can result in oral structures such as the jaws pushing back and closing the airway. When the airway is closed, they are not breathing enough – they are not getting enough oxygen… just like a regular adult sleep apnea patient. If the child has sleep apnea, they may just be tired during the day, acting out at school because they are not getting the sleep that they normally should.”

In addition to underdeveloped or irregular oral structures, Dr. Fulbright says obesity, heredity, and even exposure to tobacco smoke have been linked to sleep apnea. He notes that the condition can be the cause of severe physical and emotional health risks; however, Dr. Fulbright says there are some advanced treatment options that can significantly reduce the symptoms of sleep apnea. One of the more common for children is what’s known as a palate expander. “[It’s] a removable orthodontic appliance… a very simple procedure. As soon as the palate is expanded, it opens the airway.” Dr. Fulbright notes that, in some cases, removal of the adenoids and the tonsils may also be indicated in order to reduce airway obstructions while a child sleeps.

Ultimately, Dr. Fulbright says, a comprehensive oral examination and diagnostic tools such as a polysomnogram (a series of tests to study behavior during sleep) can help determine if a child may be suffering from sleep apnea. He notes that children with sleep apnea, just like adults, are not only at risk for emotional and behavioral shifts from this condition, they are also at an increased risk for serious, life-threatening health problems – including sudden cardiac death – because of a lack of oxygen during sleep. With that in mind, Dr. Fulbright says advanced treatments available for this condition can significantly reduce the physical and emotional effects that sleep apnea in children can cause and give them a healthier, more restful night’s sleep.

For more information about Dr. Fulbright and his practice, visit fulbrightdental.com or facebook.com/FulbrightDental.